You are here: HomenextKeywordsnextWorld War 2nextBomb and shell sites in St Margaret's. 1941 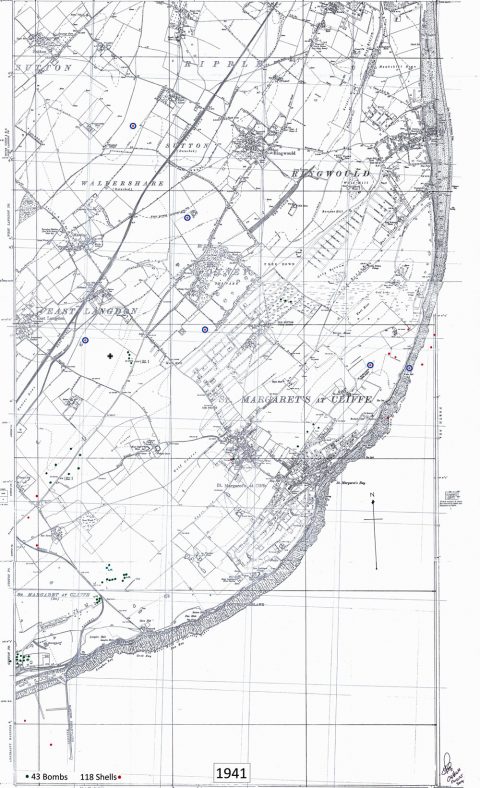 The 1941 map looks a little bare, however, there were still 118 shells and 43 bombs recorded landing in our area. Many of these were directed at channel convoys and therefore dropped out to sea so most of these could not be plotted on this map.

Shells are also recorded in the ARP logs as exploding in our area and beyond but as no accurate references or topographical locations are given, these are also not plotted here.
The map would look very different if all these hits could have been recorded. It is noted that land mines were also dropped in greater numbers during 1941.

There were several aircraft incidents during the year, some were recorded simply as aircraft seen to be coming down in the area or into the sea, and these are once again not plotted as no specific locations are given. Only those recorded in the logs with locations are plotted, these are marked with the aircraft’s relevant national symbol. Additional information was obtained from internet records and from David Collyers’ book, “Deal & District at War” to which we acknowledge our thanks.

The system of plotting the shell and bomb hits changed during 1941 when the WOFO, (War Office False Origin) Cassini system started to be adopted by the local ARP.
Before this the ARP wardens used a system that was virtually unknown, only after many months of research was it deciphered
.
We were helped in this work by the Charles Close Society who specialise in Ordnance Survey research and a working solution was found,which has proved to be generally accurate but because the squares used are quite large, there might be small margins of error.

The accuracy of the Cassini system was much better, mainly due to the fact that the reference squares are smaller.
An interesting fact was that in February 1941, the number for residents recorded as living in the parish was only 321.