You are here: HomenextVillage archivenextWarnextVillage WW2 shelling and bombing sitesnextBomb and shell sites in St Margaret's. 1942 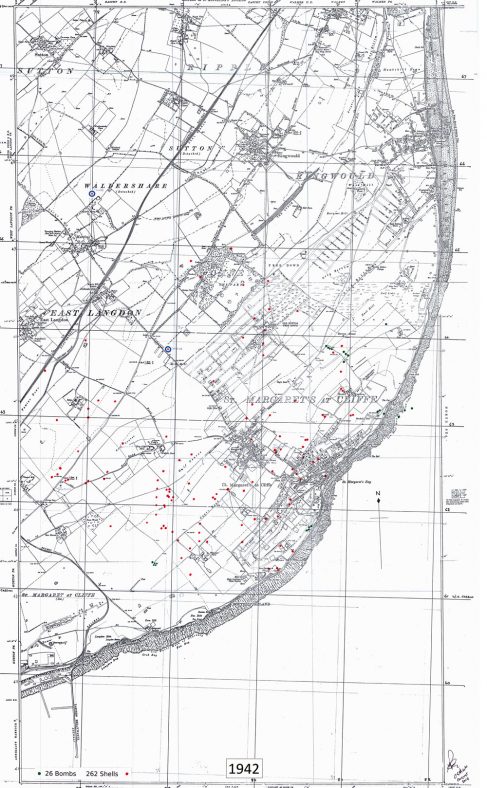 The shelling and bombing became intense again during February 1942 with many houses damaged in the Bay, village and Nelson Park areas
.
The ARP log makes no reference to the Channel Dash, this was the escape of the German battleships Scharnhorst, Gneisenau and Prinz Eugen through the Dover Straits on February 12th. It is known that the South Foreland battery fired 33 rounds by radar but no hits were secured. The log however, does record what was described as loud explosions from 12.19 pm until 12. 55pm. It is noted that it was difficult to determine whether the explosions were from our own guns firing or from incoming shells.

In March, the 15 inch gun “Jane” was installed at Wanstone Farm followed in May by “Clem” also at Wanstone. These guns were the largest used by the artillery in this area. They were capable of firing a one ton shell over 25 miles.

As a result of the increased shelling, many residents requested Anderson and Morrison shelters; these were erected by the local Civil Defence members. The log records many local residents requesting them in 1942.

On 4th September, “Crossways”, the house owned by Mr George Arliss, the famous actor was destroyed by a direct hit; five people including his gardener, Mr Chapman, were found sheltering in its air raid dugout and were all safe.

Unfortunately, on the 9th November, eleven military personnel were not so lucky when their trench received a hit in Reach Road opposite Reach Court Farm. All were killed; this incident was the largest single loss of life recorded in the St Margaret’s area during the war.

On a lighter note on the same day, Mr Melhuish reported a carrier pigeon walking about near his garage. The pigeon No/NUPP42S8896 was recovered with its red Bakelite message container intact.

Parishes of St Margaret's and Westcliffe