You are here: HomenextKeywordsnextWorld War 2nextBomb and shell sites in St Margaret's. 1943 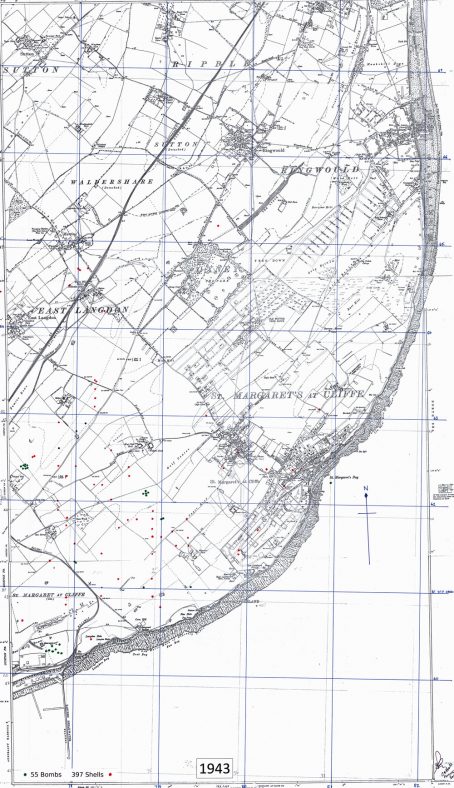 This village continued to take considerable punishment from the German guns and the Luftwaffe in 1943. The ARP log records the bombing in the first few months which was followed by an increase in shelling for the rest of the year.

The map gives the false impression that not many shells and bombs landed in our area at this time, this is because not all the incidents in the ARP log were given specific map references.
The actual numbers were in fact 397 shells and 55 bombs.
Some of these fell in the sea as the guns targeted convoys and shipping in the channel.

The ARP wardens made a special log called the “Put and Take Log”, this log (which has been lost), recorded the number of (Puts), shells put over to France by our own guns, and (Takes), the number of shells taken or received from the German guns. As this log only recorded numbers, the actual location of the hits were not noted.

The local residents reported damage sustained to their property from shell fire to an officer who would inspect and authorise repairs to be carried out, the jobs were usually given to local builders who would carry out the repairs.
It is evident that there was considerable damage caused by the firing of our own guns. The concussion from these guns brought down ceilings, blew slates off roofs, put in doors and broke windows. To help with this situation, it was decided to hoist a red flag from the church tower when firing was in progress warning residents to open their windows and take cover.
When firing ceased, a blue flag was hoisted. It is noted in the log that when this warning was first given, civilians were not taking cover and vehicles were seen passing as usual!

Bruce, an experimental long range gun situated near Bockhill Farm was recorded as firing for the first time on March 30th.
This super hyper-velocity gun suffered from many technical problems and was never fired in anger, although it was intended to have been capable of firing an 8 inch shell for 57 miles.

Assigned to the History Society