You are here: HomenextVillage archivenextWarnextVillage WW2 shelling and bombing sitesnextBomb and shell sites in St Margaret's. 1944-45 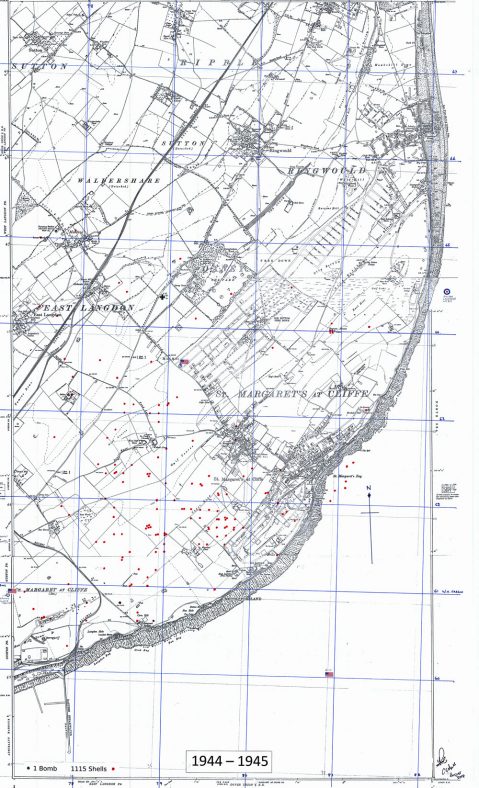 1944
1944 began with a German FW190 fighter being shot down by Anti-aircraft fire, the aircraft crashed near the Dover/Deal road at Oxney on January 3rd.

The village was shelled constantly by the German guns with our guns also in action; the logs record the amount of shells in the “put and take” log.
A study of these figures shows the intensity of the bombardment; it is interesting to find that up until the German guns were silenced in September, they had fired 1115 shells. Our own guns had also been busy, firing a recorded 1164 shells.
It is inevitable that damage from this amount of “put and takes,” caused considerable damage to houses and property in the St Margaret’s area.
The logs are full of damage reports to village properties.

It is again interesting to note that out of all the 1115 known shells fired at the village, only 142 of them have been fully recorded, the reason is the same as before, only known references are plotted in the ARP log books. If one were to add another 973 red dots ( often recorded in the logs only as a noise) to the map, the effect would be much more impressive.
For example,the log for 6th June 1944, D-Day, simply states “ 5 shells at sea, ship struck burning all afternoon”.

On the 14th June, the first flying bomb (V1) was recorded flying NW over the village. These weapons were regularly recorded passing over the area but none actually landed in the village, the closest being in the Nonington area.
The log does however record a V1 being shot up in mid-air over the sea causing a terrific explosion.

On the 30th September at 09.30, a message was received from Dover Central Control. “The Mayor of Dover has received official information, that all the long range guns on the other side of the channel have been captured”
No more “take” shells are recorded !

1945
An entry on the 8th January again records an aircraft incident; a plane had made an emergency landing at Nelson Park. This proved to be a four- engine plane of the American air force, a B-17 Flying Fortress. All the crew were safe.

Another incident on the 27th January did not have such a happy ending when an American fighter bomber crashed killing two crew members.
There is another report of a B-17 from the 457th heavy bomb group which ditched in the sea off South Foreland on the 25th February. Four of the crew were killed.

With the threat of shelling over, the ARP log now concentrates on the repairs to damaged properties and other duties. Village residents were asking for their shelters to be taken down and removed, these were dismantled and taken by the rescue lorry to a storage area at Temple Ewell.
Morrison shelters could be purchased for £1.10 shillings and Anderson shelters for £1.00 by the persons who were issued them. A stirrup pump cost 7/6

On the 3rd of May, an instruction was received from the Chief Constable of Kent,
“The air raid warning system will be discontinued as from May 2nd. Sirens will cease to operate and Post office intimation no longer function. The display of ‘Warning’ and ‘All Clear” boards is therefore no longer necessary. All disbandment notices have now been issued to personnel.”