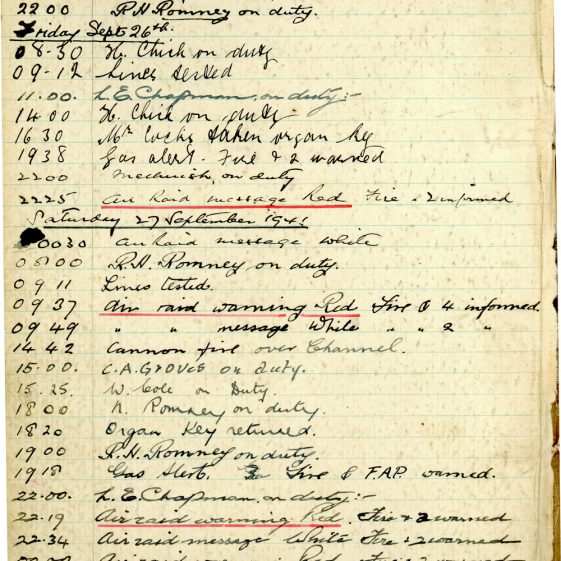 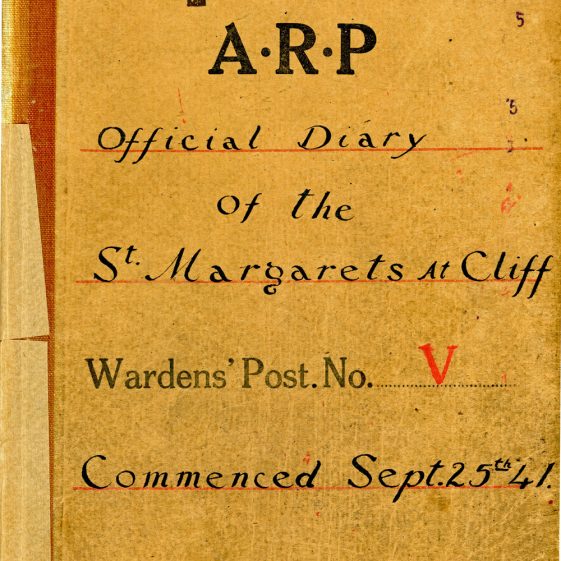 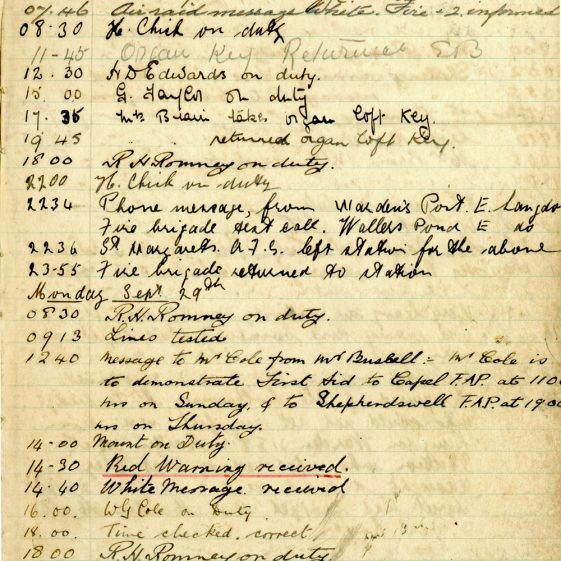 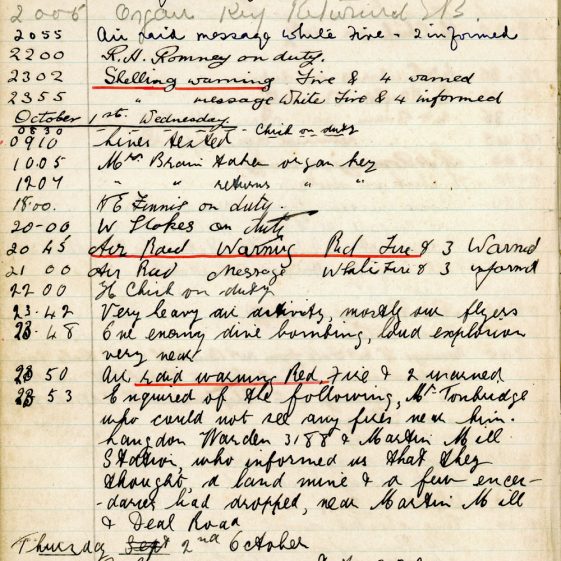 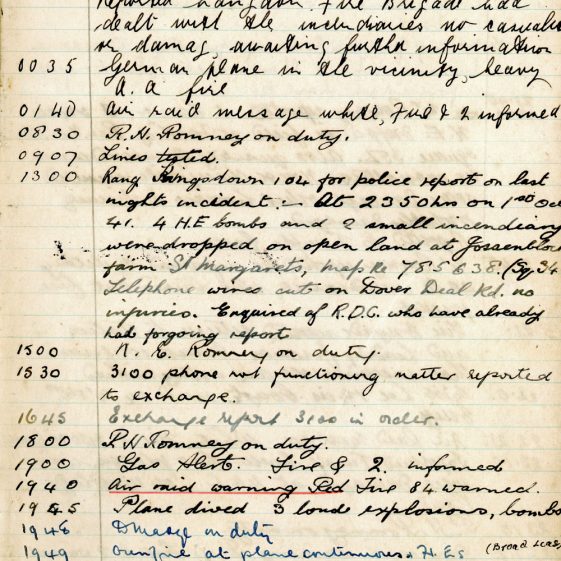 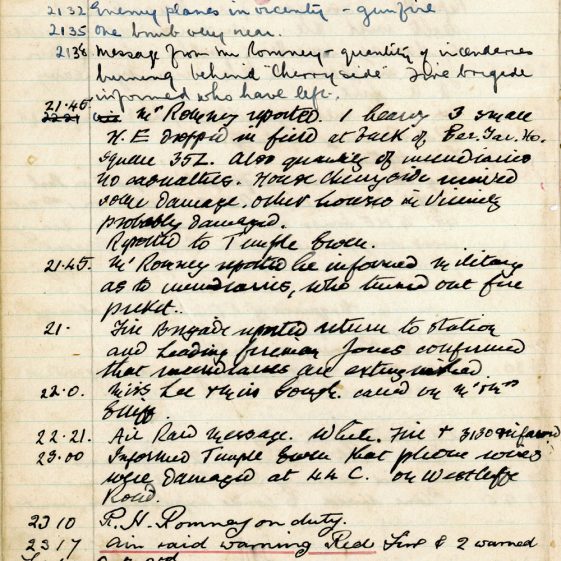 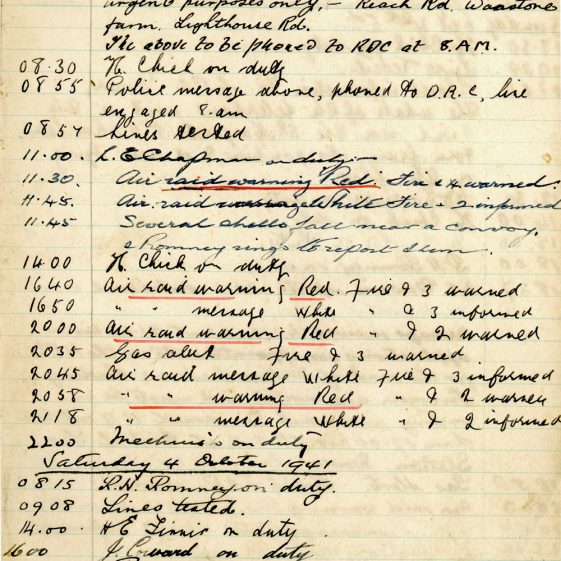 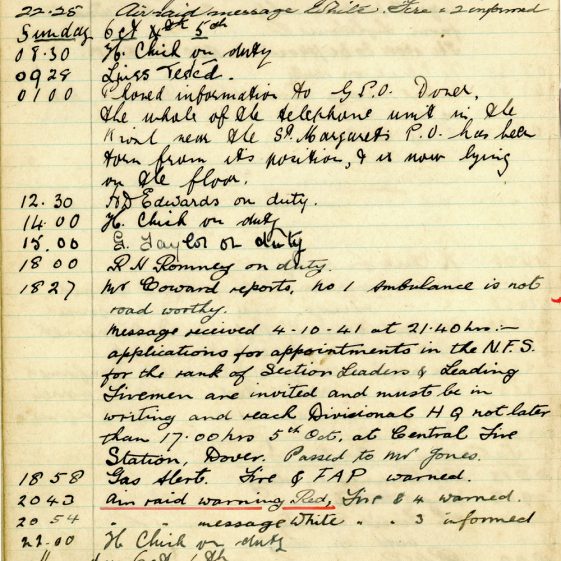 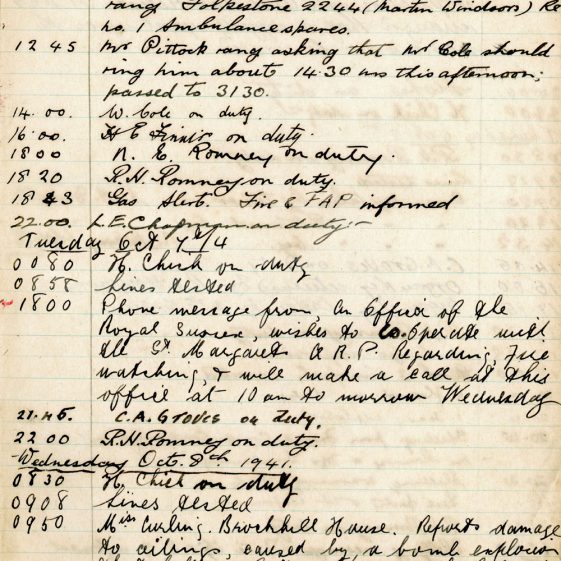 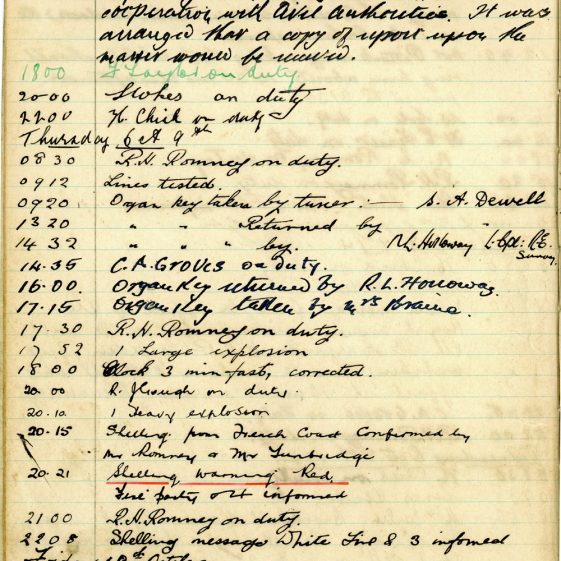 The fifth of nine volumes of the St Margaret’s ARP Logs. This volume covers the period from 25th September 1941 to 17th July 1942.

During this period air raids continue over the area as does shelling from the German gun batteries on the French coast. The shelling and bombing became intense again during February with many houses getting damaged in the bay, village and Nelson Park.

The ‘Channel Dash’ ( the German navy squadron consisting of two battleships, ‘Scharnhorst’ and ‘Gneisenau’, heavy cruiser ‘Prinz Eugen’ plus escorts that ran a British blockade through the English Channel) occurred during the period between 11th and 13th February 1942. The coastal guns at St Margaret’s engaged the fleet as it passed on the 12th February, the exchange of shellfire and subsequent damage to local properties recorded in the log although specific reference to the ‘Channel Dash’ is not recorded.

In March the 15inch gun ‘Jane’ was installed at Wanstone Farm followed in May by ‘Clem’ also at Wanstone. These guns were the largest used by the artillery in this area. They were capable of firing a one ton shell over 25 miles.

As a result of the increased shelling many residents requested Anderson and Morrison shelters; these being erected by local civil defence members. The log records many local residents requesting them in 1942.

The Air Raid Warden Service was set up in 1937 dedicated to the protection of civilians from the damage from air raids. The St Margaret’s ARP Post was set up in the Cliffe Hotel in St Margaret’s-at-Cliffe High Street. The Chief Warden was Charles Groves who was also the hotel proprietor.

Given St Margaret’s proximity to the French coast air raid warnings figure prominently in these logs.

Air raid warnings were colour coded which is how they are recorded in the log. They are as follows:

‘AIR RAID MESSAGE YELLOW’
A PRELIMINARY CAUTION that raiding aircraft are approaching the UK. Sent to recipients on the district warning list of districts in which raiders appear to be heading. This message is only a preliminary warning and was confidential. It was neither to be passed on from one district to another nor to be conveyed to the public.

‘AIR RAID WARNING RED’
An ACTION WARNING that raiding aircraft are heading towards certain districts that may be attacked within from five to ten minutes. Sent to recipients on the direct warning list of districts threatened. Message passed by telephone to certain authorities on the warning list who will sound the Air Raid Warning.

‘AIR RAID WARNING GREEN’
RAIDERS PASSED. Raiding aircraft have left districts warned or no longer appear to threaten those districts. Sent to all recipients of an ACTION WARNING. Message passed by telephone to certain authorities on the warning list who will sound the RAIDERS PASSED.