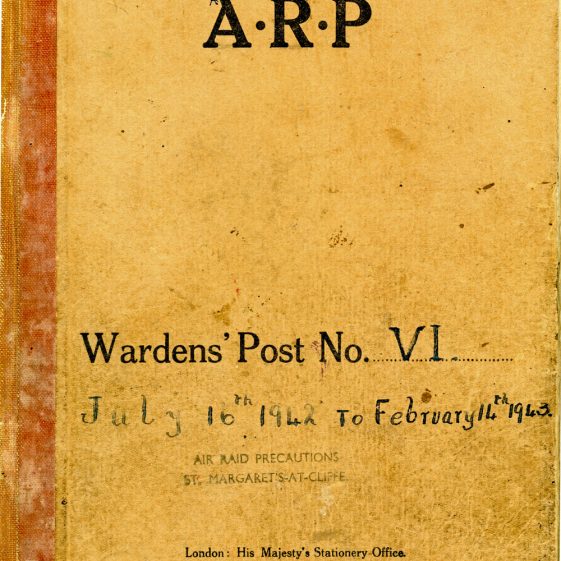 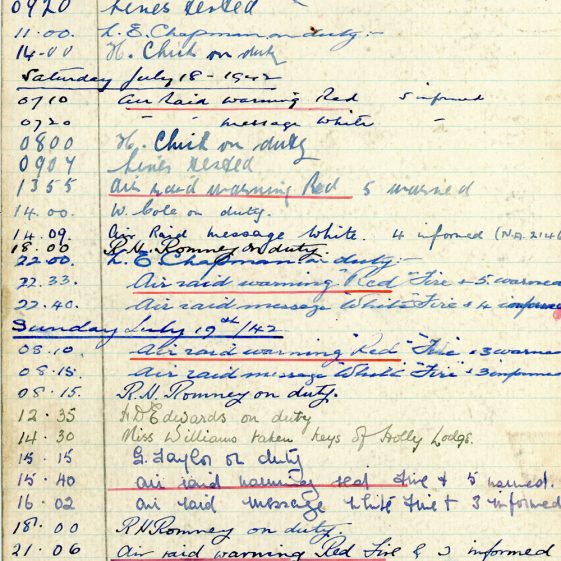 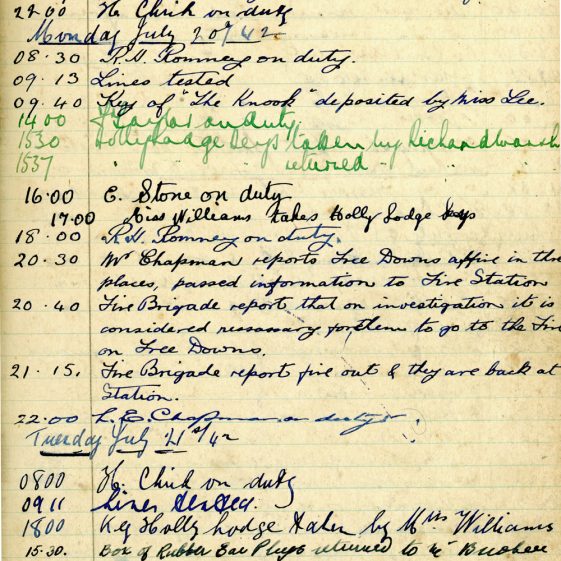 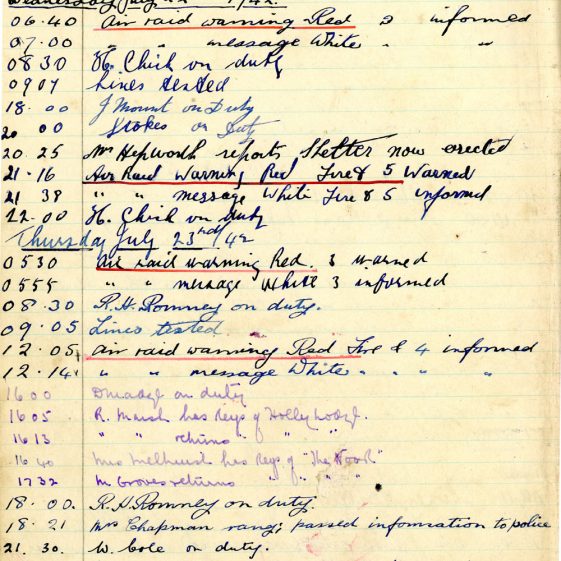 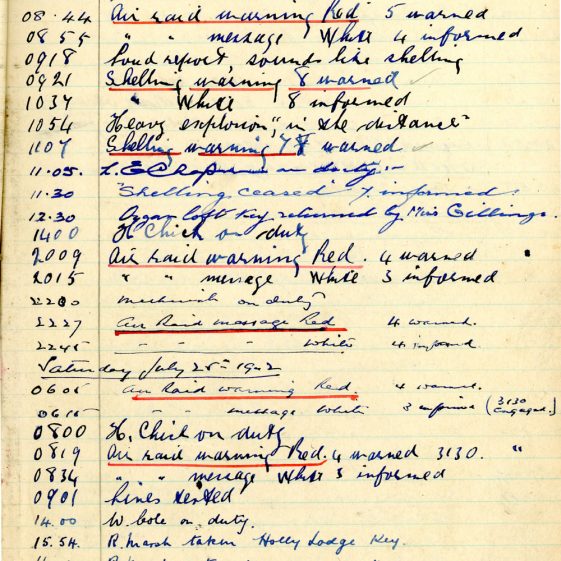 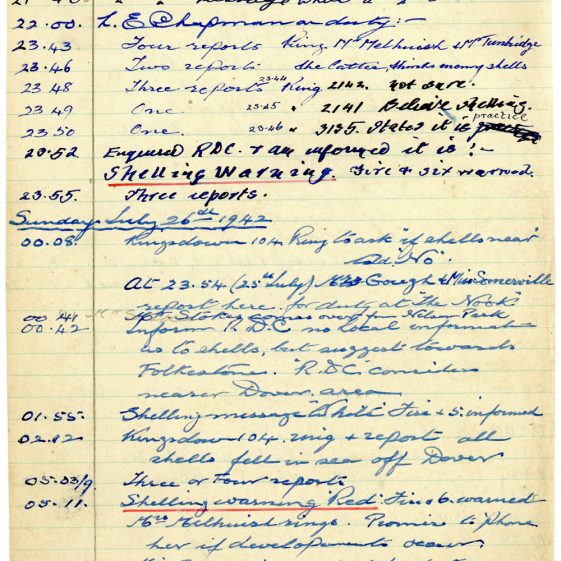 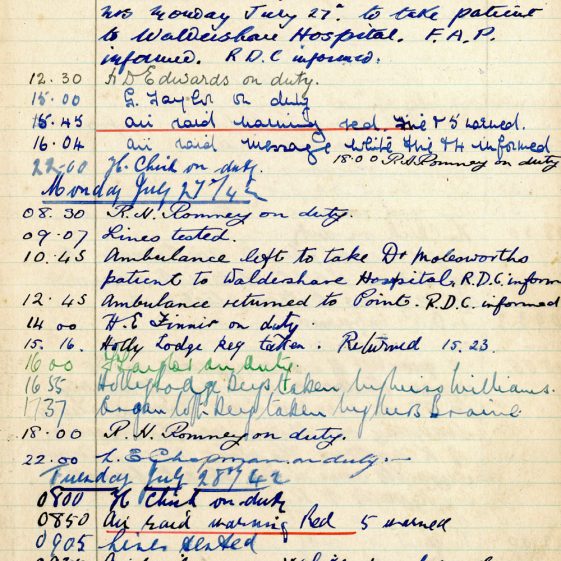 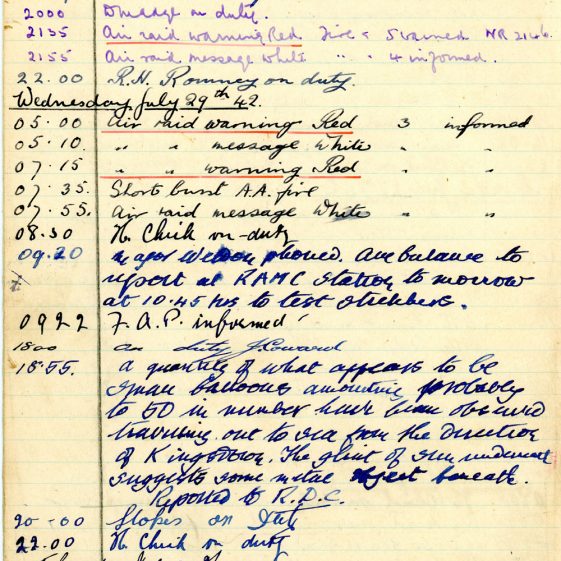 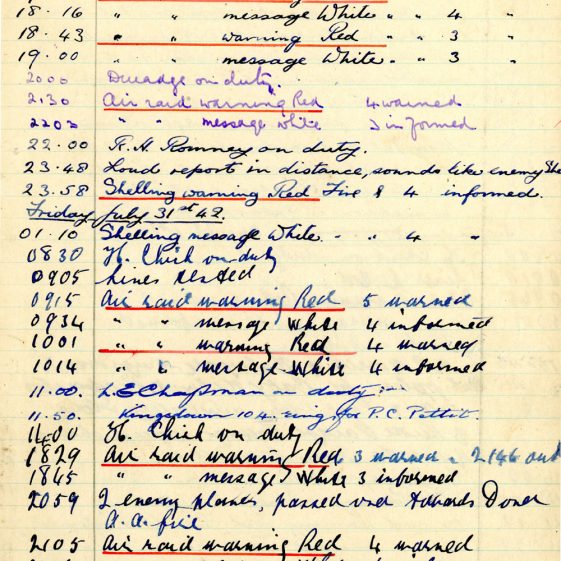 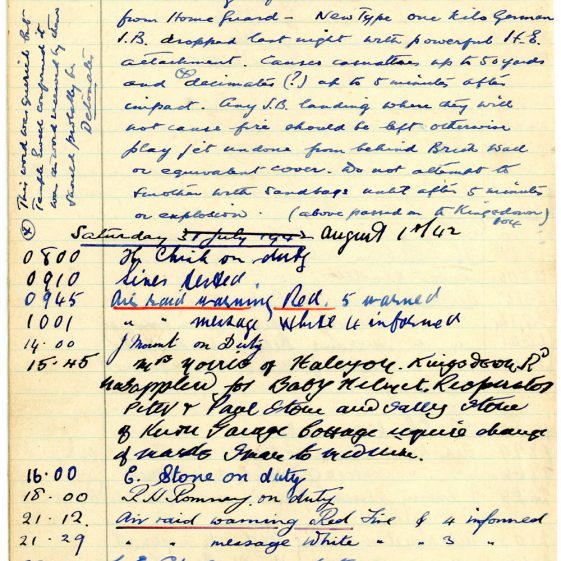 The sixth of nine volumes of the St Margaret’s ARP logs. This volume covers the period from 17th July 1942 to 16th February 1943.

The constant daily reference to shellfire and bombfall demonstrates that the village continued to take considerable punishment from the Luftwaffe and the German gun batteries on the French coast. A few of the entries use ‘Puts’ and ‘Takes’ to refer to shellfire. ‘Puts’ were shells put over to France by our guns while ‘Takes’ refer to the number of shells taken or received from the German guns.

On 4th September 1942 Crossways, the house owned by Mr George Arliss, the famous actor, was destroyed by a direct hit. Five persons were found sheltering in the air raid dugout and were all safe. Unfortunately, on the 9th November, eleven military personnel were not so lucky when their trench received a hit in Reach Road opposite Reach Court Farm. All were killed, this incident was the largest loss of life recorded in the St Margaret’s area during the war.

Given St Margaret’s proximity to the French coast air raid warnings figure prominently in these logs.

Air raid warnings were colour coded which is how they are recorded in the log. They are as follows:-

‘AIR RAID MESSAGE YELLOW’
A PRELIMINARY CAUTION that raiding aircraft are approaching the UK. Sent to recipients on the district warning list of districts in which raiders appear to be heading. This message is only a preliminary warning and was confidential. It was neither to be passed on from one warning district to another nor to be conveyed to the public.

‘AIR RAID WARNING RED’
An ACTION WARNING that raiding aircraft are heading towards certain districts that may be attacked within from five to ten minutes. Sent to recipients on the direct warning list of districts threatened. Message passed by telephone to certain authorities on the warning list who will sound the Air Raid Warning.

‘AIR RAID MESSAGE GREEN’
RAIDERS PASSED. Raiding aircraft have left districts warned or no longer appear to threaten those districts. Sent to all recipients of an ACTION WARNING. Message passed by telephone to certain authorities on the warning list who will sound the RAIDERS PASSED