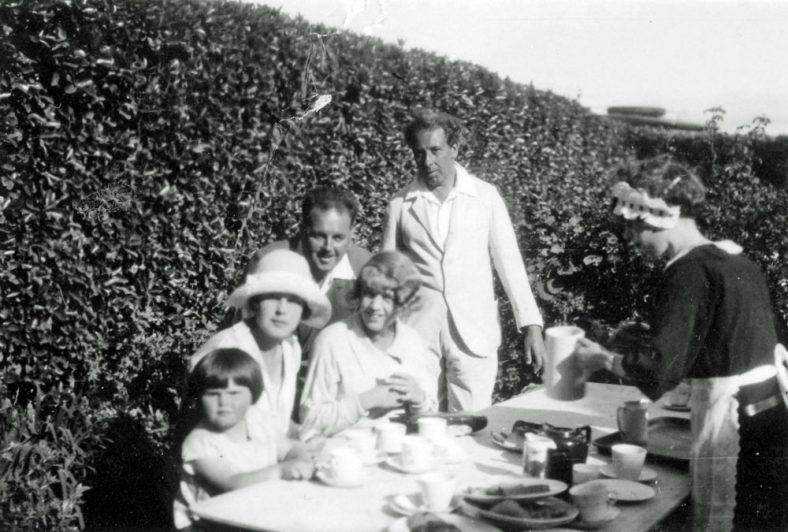 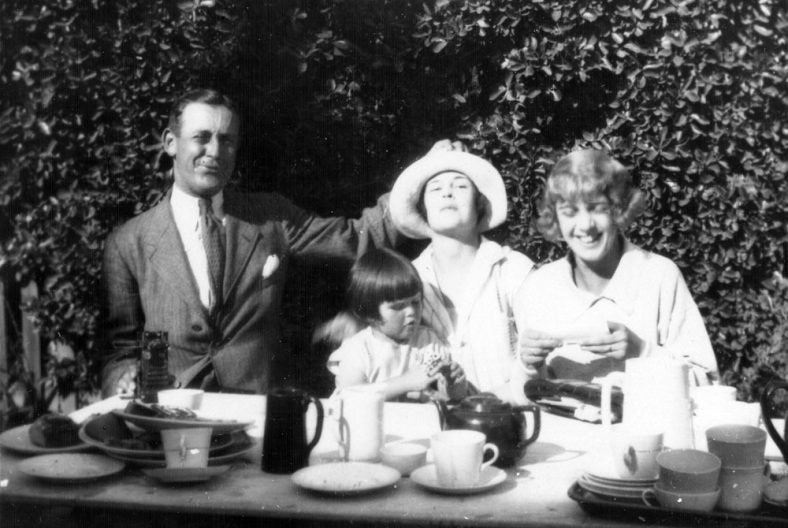 From the Gordon Denoon album two photographs of the Denoon family and friends taking tea at the Excelsior Tea Rooms in St Margaret’s Bay in the mid to late 1920s.

The accompanying caption to the first photograph reads:
‘Joan, Tommie, Hilda Galley, me and ‘Uncle Percy”

In the second the group is identified as:
‘ Shep, Tommie, Joan and Hilda’

‘ Already established at the time of our first St Margaret’s holiday (in 1910)…………from that time until its closure due to World War II it had provided hospitality for holiday-makers innumerable.
Excelsoir (sic) was set at an angle to the sea, to take advantage of the late afternoon sun before it disappeared behind the cliffs. In addition to the ground-floor café with its tables and chairs, to which the centre doorway at the front gave access, there were letting rooms upstairs (three bedrooms and two sitting rooms) the dormer windows of which projected from the long sloping roof. These rooms were in great demand during the summer season and it was quite usual to see the window sills covered with towels and swimming gear drying in the sun. The rooms were sometimes booked out of season as the establishment was open all year round. These private rooms had a separate entrance on the west side; there was also a detached bed-sitting room.
Excelsoir (sic) was synonymous with Mrs Morse, the manageress for many years, who became well acquainted with each member of our family. Her home-made cakes and coffee were in constant demand especially after swimming; on her retirement her daughter took over management.
Excelsoir (sic) had other advantages: there was a public telephone and the house was provided with ‘modern sanitation’, and a penny-in-the-slot department served a useful purpose.
Perhaps it should be mentioned that the only other places in the Bay at sea level catering for visitors were the Bay Hotel with its swimming pool, and the Green Man: the former a luxury establishment patronized by the rich and famous, and the latter a centuries-old flint-walled inn noted for its alcoholic refreshment and many legends of smugglers’.
The battle school established in the Bay during World War Two saw the end of the Excelsior , as it did of the other buildings around the shore’