From late 1945 to mid 1951 actor, singer and playwright Noel Coward leased a house  in St Margaret’s Bay which he called ‘White Cliffs’. He used it largely as a weekend and holiday home, eventually buying or leasing the other four art deco houses clustered around it for his friends and relatives. All still stand today but are privately owned. 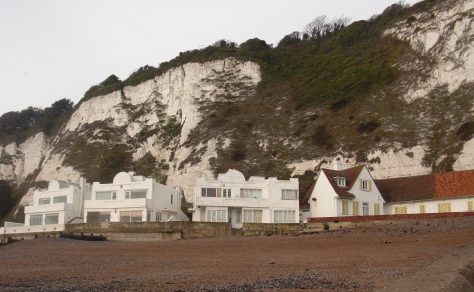 ‘White Cliffs’ had originally been built for a friend of Coward’s the Hon Kay Norton, who had called the house  with its distinctive red tiled roof, ‘Kay’s Bluff’. Coward’s own country house on Romney Marsh was still occupied by the army

Noel Coward loved the sea. The house was almost in it. Waves either lapped against or lashed the end wall of the house. Noel Coward enjoyed the thought of the White Cliffs of Dover rising steeply on his right only a yard or two from where he lay ( Cole Lesley: The Life of Noel Coward )

Apart from the sea, Coward may have been drawn to St Margaret’s by the presence of other friends in the village, such as Lady Forbes-Robertson, an eminent actress of the early 1900’s who he often visited.

It was not to be an easy move. The house and all the buildings around it had been severely damaged by the British Army who had used the once fashionable seaside retreat as a Battle Training School. To reach his new home Coward and his friends had to pass many ruined  and empty houses, hotel, tearoom and  pub and large chunks of concrete invasion defences and wire. 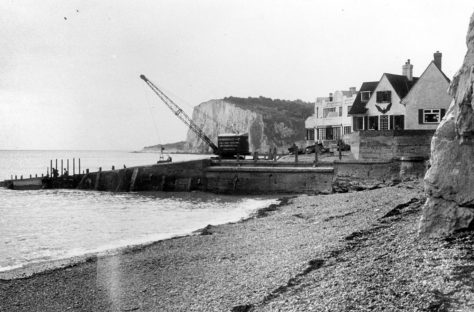 In the summer of 1945 Coward and friends with the help of ‘Harry’ began to repair the house, moving in, still without heating or electricity, in October. On his first night there Coward said

An evening of enchantment, I know this is going to be a happy house (Noel Coward Diaries, Payn and Morley)

In Coward’s seven years in the Bay he entertained a large array of famous friends from the arts, film and stage.  Katherine Hepburn stayed  here with Spencer Tracey and swam daily from the shore. Daphne Du Maurier, Ian Fleming, Gertrude Lawrence and John Mills all came to relax, play Canasta and Scrabble or join Coward in his painting studio where he produced oils of the Bay and Jamaica. in 1946 his mother and aunt moved into one of the white art deco houses. 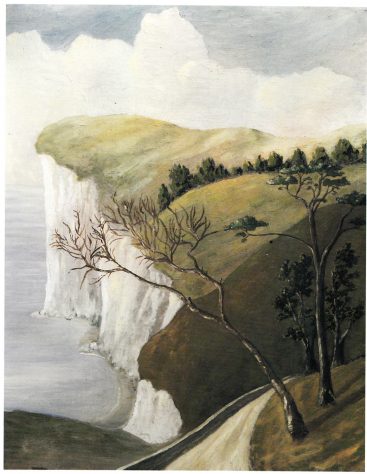 As life in the village and the beach area began to return to normal, Coward’s privacy came under threat. In the severe winter of 1947 large lumps of chalk fell only a few hundred yards from the house and he needed to decide if he wished to extend the lease on ‘White Cliffs’. Ian Fleming had allowed him use of his house in Jamaica, where soon Coward was to build a place for himself. In 1951 he decided to leave and return to his Romney Marsh home. Ian Fleming took on the lease.using it as a weekend retreat until 1958.

You should also see ‘ The Life of Noel Coward ‘ by Lesley Cole and ‘The Noel Coward Diaries‘ by Graham Payn and Sheridan Morley.

Comments about this page