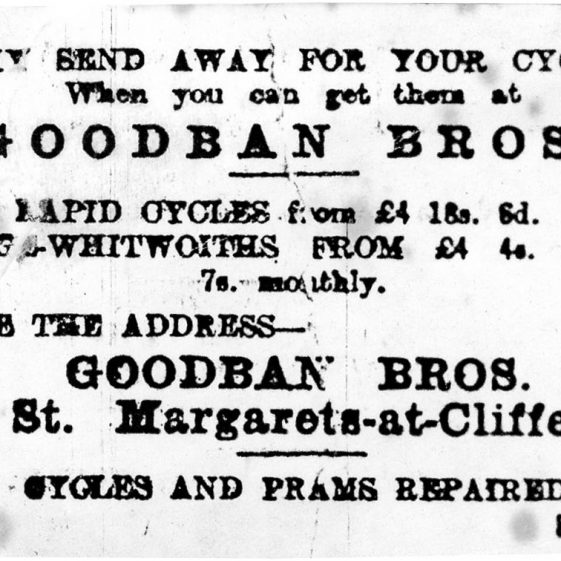 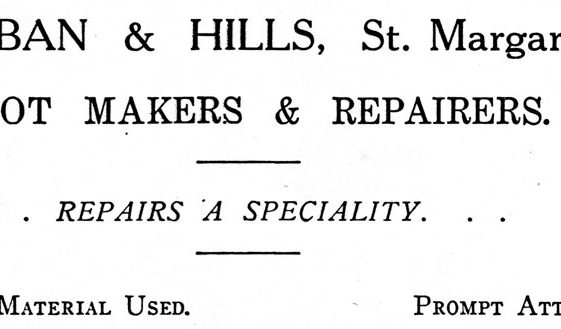 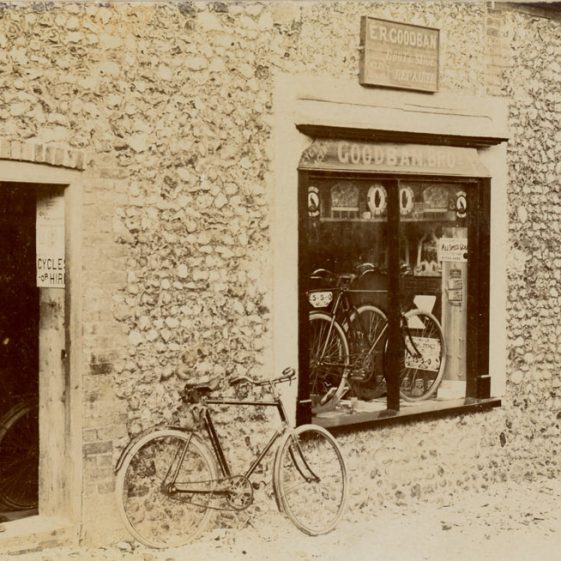 The gentleman in the doorway in the photograph is thought to be one of the Goodban brothers, most probably Edward.

The photograph shows the exterior sign above the window ‘E.R Goodban, Boot & Shoe Repairer’. The sign in the window reads ‘Goodban Bros. Cycle Agents’.
The second advert for Goodban Bros is thought to be from the Dover Express in 1908. The photograph is thought to have been taken between 1912 and 1919 when the shop was run as Goodban Bros. after which the shop became Goodban & Hills
Alice Goodban, sister of the two brothers who ran the shop married a Mr Hills in 1916.

Our Archivist,Ruth Nicol, has supplied the following additional information about the Goodban family.
GOODBAN
The family with this surname came to St Margaret’s at Cliffe sometime after 1894 from Ripple . Edward GOODBURN*, a farm worker was living with his wife Eliza in East Langdon in the 1871 census , no children then but by the time the 1911 census came round the couple had had 13 children. Only ten of those were still surviving in 1911 and then in 1913 their 21 year old son also died. Most of their children were born in Ripple

Of those 13 children the two who had the most impact on the village were Edward Robert born 1886 and elder brother Charles Edward , born 1884 .
Between them they ran the cycle agency and boot makers shop in Chapel Lane.
A 1901 census entry for Church Street , St Mary, Sandwich shows Charles E. GOODBAN aged 16 , boarding with Henry and Fanny Sutton. Henry is a grocer’s car man and their son Edward W Sutton aged 17 and Charles Goodban are both apprentices to the cycle trade .
In the next census in 1911 Charles is back in St Margaret’s with his parents , and is now a fully fledged cycle agent.
In 1901 Edward Robert GOODBAN was aged 14 and living at 2, Wellesley terrace in the village with his parents and had the occupation of a shop boy bootmaker.
In 1911 he was living with his wife Hilda ( nee FISHER) in 2 Springfield Cottages , Chapel Lane a fully fledged cycle agent and bootmaker.
* It is interesting to see the surname spelling changing over the years . People wrote down how things sounded and spelling could be very imaginative at times .