You are here: HomenextKeywordsnextWorld War 2nextBomb and shell sites in St Margaret's. 1939-40 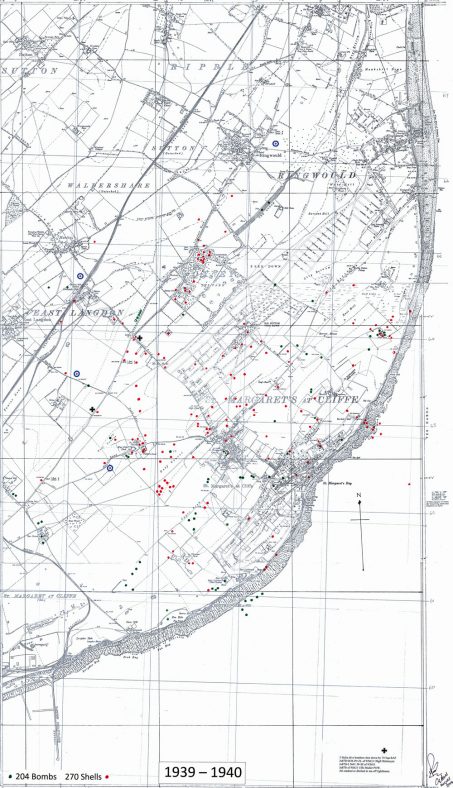 This map covers two years at the beginning of the war.

1939
The ARP log for 1939 starts in August and records the build-up and training given to the 122 wardens listed. Most of these served only during the first year, some for whole of that period, others for only a week or two.

When war was declared on September 3rd, the log records the measures that were taken to warn and protect the inhabitants from the expected attacks by Nazi Germany.

Exercises were conducted to train the wardens and rescue parties; Street Farm Garage was the ambulance station and rescue party HQ
.
The first record of action was on 9th November when gunfire was heard and 12 explosions were seen out to sea towards Kingsdown.

On 20th November, three of our aircraft were seen on patrol and automatic fire heard, more explosions were observed to the east of the village and an aircraft under fire was spotted.

Also in November, the Dover Express carried a report of a piece of shell falling on the 1st tee of the golf course, narrowly missing Mr William Curling. This is recorded in the log as being a nose cone from an anti-aircraft shell and was recovered by anti-aircraft officers.

On the 21st December, it was reported to the police that something in the shape of a bomb was seen on the seashore, east of the third fall.

All these facts are recorded in the ARP logs that are held in 9 hand written volumes by the St Margaret’s History Society. Some of these records are barely legible and were meticulously transcribed by Ruth Nicol, the Hon Archivist of the History Society.

1940
Things began to ‘hot up’ in 1940.
The ARP log for this year begins with an aircraft crash at Westcliffe in May; aircraft incidents were numerous in our area in 1940 mainly due to the Battle of Britain much of which took place directly above the village. The map records the position of these aircraft crashes.

Barrage balloons were also targeted and many came down in the area, most of these are also recorded in the log.

Brief notes give a potted history of the war as it progressed, there are references to the evacuation of Dunkirk and then the Battle of Britain etc., at that time, these references were merely small notes, the significance of them was not realised as being such important times in our history
.
The first bomb damage to our church took place at 12.34 on the 14th August, four bombs one large and three small were dropped in the churchyard causing a large crater 20ft from the West Door, a photograph of local men repairing the damage is in the village archive.

Alan Poole’s grandmother recalled the debris raining down on the roof of Erin Cottage as she took cover in the cellar.

On 28th July 1940, Warden Roland Romney reported a shell landing near house Highlands. This is the first time that the word ‘shell’ is recorded, up until then only bombs had been dropped and in August, Warden Romney again reports shells from guns on the French side.

In September, Mr Dare reported that a shell passed through Walletts Court farmhouse ‘presumably from France’

204 bombs and 270 recorded shells were dropped in our area in 1940, mostly H.E (High explosive) although there were also many incendiaries.

Bombs and shells caused considerable damage to houses in the Bay and village in this year. The bombs that dropped in the Bay Hill area and Granville road in November 1940, destroyed several properties and damaged many more.

In November both Westcliffe and St Margaret’s at Cliffe churches were damaged by shellfire again.

Assigned to the History Society